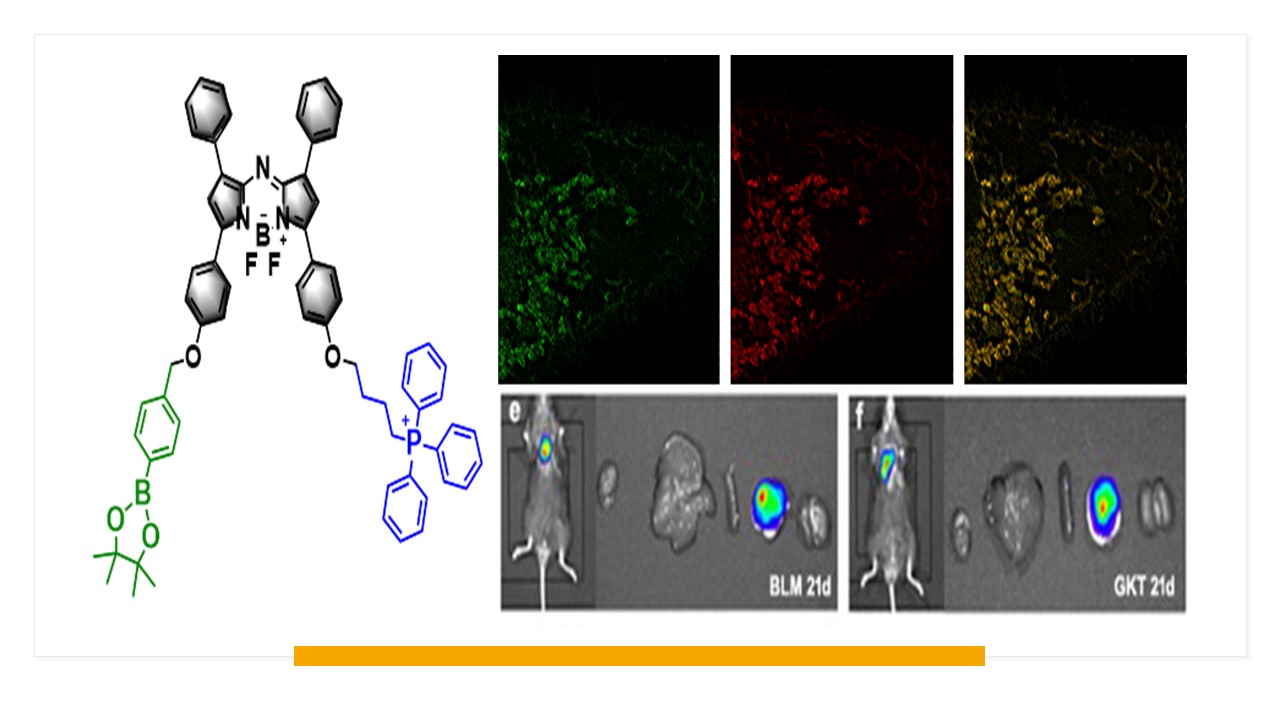 Abstract Image
Pulmonary fibrosis is a fatal chronic lung disease, leading to poor prognosis and high mortality. Accumulating evidence suggests that oxidative stress characterized by excessive production of hydrogen peroxide (H2O2) is an important molecular mechanism causing pulmonary fibrosis. We conceive a new type of mitochondria-targeted near-infrared fluorescent probe Mito-Bor to investigate changes in the level of endogenous H2O2 in living cells and mice models with pulmonary fibrosis. In the design strategy of the Mito-Bor probe, we selected azo-BODIPY as the fluorophore owing to its near-infrared fluorescence, strong photochemical stability, and low biological toxicity. Under physiological conditions, the response moiety 4-bromomethylphenylboronic acid pinacol ester could easily detect H2O2, and turn the fluorescence switch on. The modification of the lipophilic triphenylphosphine cation on the fluorophore would allow the probe to easily pass through the phospholipid bilayer of cells, and the internal positive charge could contribute to the selectivity of the mitochondria accumulation. The Mito-Bor probe provides high selectivity, low limit of detection, high biocompatibility, and excellent photostability. It can be used to detect changes in the level of H2O2 in living cells and in vivo. Therefore, the probe is applied to investigate the fluctuation of the H2O2 level during the process of inducing pulmonary fibrosis in cells, with changes in its fluorescence intensity correlating with the concentration of H2O2 and indicating the level of oxidative stress in fibroblasts. Conversely, pulmonary fibrosis can be modulated by adjusting the level of H2O2 in cells. A further study in mice models of bleomycin-induced pulmonary fibrosis confirms that NADPH oxidase 4 (NOX4) acts as a “button” to regulate H2O2 levels. The direct inhibition of NOX4 can significantly reduce the level of H2O2, which can delay the progression of lung fibrosis. These results provide an innovative way for the clinical treatment of pulmonary fibrosis.